Fashion is a trend, style is self–expression, and it lives within you. Ginger jars are part of our everyday lifestyle, they were once part of “fashion”, meaning they were collected, one would have them because they were influenced by a popular trend whereas nowadays one can have them because of one’s taste or elegance in decoration.

What is a ginger jar?

It is a round-shaped jar with a domed lid, bulging out from the top and in towards the base, often adapted as a lamp base… (look at the sample image above)

Ginger jars were used to store and carry spices and herbs in Ancient China such as salt and ginger, when these jars came to Europe that is where the ginger part of the name was adopted hence calling them “ginger jars”.  One can promptly spot a ginger jar when one sees one because of its different, one-of-a-kind shape.

They are identified by their high shoulders, rounded shapes, small mouths, and domed lids. They are famously known for their beautiful colors, blue and white although one can now find them in different designs and colors. 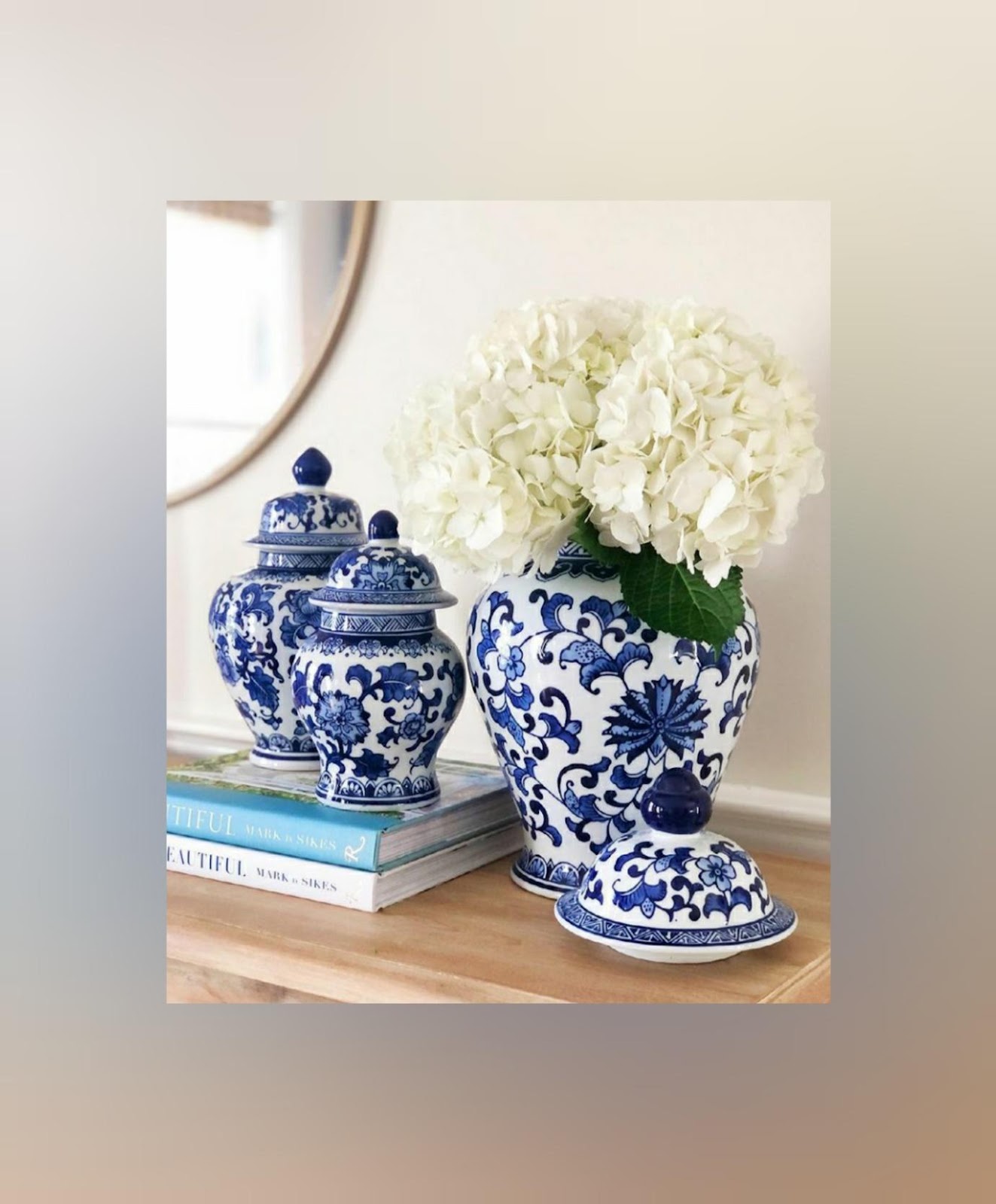 Get yours Ginger Jar On Amazon

Related Post: Gold Mirror Wall Décor Trend & How to Use It

Ginger jars are a classic home décor accessory and they are also known as temple jars, although there is a slight difference, ginger jars are typically round with a flat top whilst temple jars are rounder near the top and get narrower towards the bottom. From my perspective, I feel as though every home deserves to have a ginger jar to add that stunning and dazzling feature. After all, style is not a display of wealth but an expression of imagination.

As Anna Wintour would say, “create your own style, let it be unique to yourself and yet identifiable for others”. Ginger jars may seem like a small thing and one may actually say what is the fuss about but it is important to celebrate the smaller things in life because sometimes it’s the smaller things that actually matter, that define you as a person. Think about that!

One may ask what the story behind ginger jars is?… Ganea (2020) states that ginger jars weren’t always this popular, especially in Europe, and they weren’t always called ginger jars. They originated in China and they began being exported to Europe in the 19th century which is when they started being used as decorative objects.

As mentioned above ginger jars in China were used for storing, carrying, and transporting salt, ginger, and oil. These jars were produced in different colorful and less popular versions or designs making the blue and white color version the most identified and most popular one. The less popular versions are hard to find because of their lack of demand.

A point worth considering is that these jars are no longer used for their intended purpose, at least not in Europe and other parts of the globe they have basically become decorative objects. It’s quite easy to identify ginger not only by its blue and white decorative motif but also by its form as they come in a variety of dimensions. In most homes, you can find the jars decorated or displayed in groups although a solitary one can look just as stunning. A point worth considering is that there are no restrictions at all when it comes to using ginger jars as decorations in a particular décor.

More from home & living: Clever Ways To Upgrade Your Coffee Station At Home

Let’s take a look at ways one can use to decorate with ginger jars. First of all, one has to bear in mind that style is confidence and it is not about what kind of ginger jar you buy but what you do with it. Looking at “the entryway” for starters is the perfect place to welcome guests, imagine having those blue and white ginger jars with flowers in them to brighten up the spot, remember, your style defines you.

Secondly, one can place them in the kitchen, since the original use for ginger jars was storing spices, it would be a great idea to place them there. From my own perspective, I would say they would brighten up a dull and boring kitchen, utensils alone don’t make up for everything, a kitchen should look as stunning as other rooms.

Moving on to the living room, ginger jars can be used as focal points for any design. They can help draw your visitors’ attention to a particular space that you want to highlight as the center of attention. The perfect spot for them could be the living room in the sense that one can place them on a coffee table or console. You should let them be the focal point of the space.

Get yours on Amazon – To recreate the beautiful ginger jar look

The dining room, like the living room, is the most popular space in most homes. Most people choose to display their ginger jars in these spaces which is a dazzling idea. One can actually let them be the centerpiece of the table when you’re not entertaining.

I for one would say the ginger jars would look perfect in the bedroom. The blue and white colors could actually make a restful color scheme. For example, you can place them on a dresser, side table, or your closet counters.

The bathroom is another place where you can use ginger jars to lift your interior. At some point, everyone wants that spa-like retreat, ginger jars can be placed around the tub giving that refreshing, relaxing feel.

The last place to look at is the outdoors. Nothing makes a home truly complete than a well-decorated outside area, as it captures the eye of everyone.  Ginger jars are a great way to make your patio area feel put together. Using more than one ginger jar of different sizes is ideal, making the outside area look exquisite.

The blue and white ginger jar is the most traditional version of the ginger jar. This style is also one of the oldest, with examples that date to as early as the 9th century.

This style of ginger jar originated in Japan. It is characterized by traditional glazes in blue, red, and gold tones. One can identify them by their brighter white and more purple-toned blue. The red over-glaze is also thinner and closer to orange than in Japanese pieces. Chinese Imari is generally more finely potted than Japanese with a very even glaze.

It is highly known as the green family, and the style is highly in demand. It was formalized in the 16th century.

This one is known as the pink family, just like the previous one it is also highly in demand and it was formalized in the 18th century.

What is a ginger jar used for?

As mentioned above, long ago they were used to store, carry and transport spices and herbs in Ancient China. Currently, people use them for decorating their homes as illustrated above.

Where can one buy one?

One can find the gold ginger jars in numerous places be it online or in physical places. Gold ginger jars are available worldwide through online platforms like Amazon and eBay.

Get Your Ginger Jar On Amazon

These platforms are not only reliable but also an efficient and trustworthy marketplace. Thanks to honest customer reviews services on all products. Alternatively, you can buy directly from China via AliExpress. An online retail service owned by the Alibaba group in China.

Bring It All Together

Conclusively, ginger jars are used as accent pieces and decorations for interiors that are luxurious and classic. Another point worth considering is the fact that the true antique ginger jars are made of porcelain.

Hence, the demand for these ornaments in Europe created opportunities for those that started to mass-produce the jars. As stated above, the ginger jar originated in China, originally used to store spices such as salt and ginger. This is where the ginger jar name came from when it was introduced in Europe.

They are used as decorative objects, sometimes repurposed as vases or displayed as centerpieces on fireplaces, mantels, or shelves. The merits of ginger jars are that they make a home feel complete. In addition, they make any space look stunning with their dazzling style, design, and different colors. There is no right or wrong way to display a set of ginger jars.

Simply put them all in the same place or you can spread them around the room. Alternatively, you can also display them together with other decorations such as small sculptures, vases, or books. As highlighted above, there are numerous ways to use ginger jars in your home. They can be used in various ways throughout the house from the entryway to your exterior living areas. The blue and white ginger jars are the most popular type hence, in high demand.

The other types tend to be less popular and may be scarce and difficult to find. Ginger jars are a great addition to any space, a brilliant choice that will help elevate your style. Once you have determined your style and design you are halfway there to achieving that right ambiance for your space. After all, fashion is what you buy but style is what you do with it. Hence positive mind, positive vibes, and positive life…it’s the smaller things that beautify a home and defines a person… choose ginger jars!!

20 Everyday Kitchen Essentials and Tools You Need In Your Home

Bamboo Forest and Hikes On The Road To Hana – (Ultimate...

A Boss Lady’s Characteristics and Traits

© WatuDaily Media 2023. All Rights Reserved. WatuDaily participates in various affiliate marketing programs, which means we may get paid commissions on editorially chosen products purchased through our links to retailer sites and Amazon.
Loading Comments...